Ines de la Fressange may have written Parisian Chic (La Parisienne in VO or "version originale") but for me the quintessential parisienne remains Garance Doré (even though she is now basically living in New York) I've been following her blog since she started it. If you can read French, go back and read her early archives...if not, she's been translated for about three or four years now.

Looking at a map of the city of Paris you can seen that it is made up of 20 "arrondissements" spiraling out from 1 in the center to 20 on the right. It is split in two by the river Seine, with the "rive droite" on the top and the "rive gauche" on the bottom. The "rive droite" (the Right Bank) has money (the Stock Exchange) and power (the Palais de l'Elysée). The "rive gauche" (the Left Bank) is intellectual with the Sorbonne and the Latin Quarter. The arrondissements to the left on the map (7, 8, 16 and 17) are the wealthier neighboorhoods. The arrondissements on the right (9, 10, 11, 19 and 20) are working class. The 18th arrondissement is both working class (Barbés Rochechuart) and upscale (Montmartre). The arrondissements in the middle (1, 2, 3, 4, 5 and 6) are the oldest parts of the city.

Many neighborhoods in Paris can best be enjoyed by strolling ("flanner"), in particular, the Marais with its narrow, winding streets, multiple cute boutiques and restaurants, although, just about any neighborhood in Paris is worth strolling in. When I have time, I prefer to walk from point A to point B, keeping my eyes open for new discoveries and I'm never disappointed. Other interesting, artsy neighborhoods with lots to see include Saint-Germain and the Latin Quarter (5th and 6th arrondissements), the area along the Canal Saint-Martin (10th arrondissement) and the restaurants and boutiques of the rue Oberkampf (11th arrondissement). In need of a little nature, there are great parks such as the upscale Parc Monceau in the 8th arrondissement, the Tuileries in the 1st arrondissement and the hilly Buttes Chaumont in the 19th arrondissement and the Parc de Belleville in the 20th (with some of the best views of the city because of the elevation).

The Sacre Coeur and the Butte Montmartre are well known tourist destinations but the Butte aux Cailles in the 13th arrondissement offers the atmosphere of a village within the city.

The last weekend in May, the Belleville neighborhood in the 20th arrondissement, home to many artist studios, hosts "open studios" for the weekend with about 250 artists in all media represented. For more information you can connect on Ateliers d'Artistes de Belleville (in French).

The weekends (Saturday, Sunday and Monday) are the days when the Paris Flea markets are open. The biggest, attracting people from all over the world, is in Saint-Ouen "Les Puces de Saint-Ouen", just over the city line at the Porte de Clignancourt, but I prefer the smaller scale, more intimate Puces de Vanves, the only flea market in Paris intra-muros.

Other adresses for vintage and/or gently worn designer clothes are:

For a complete change of scenery, I like to spend the afternoon at the hamman: 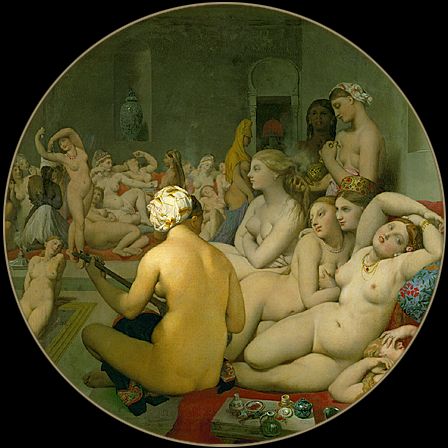 My favorite is Hammam Medina Center in the 19th arrondissement. For 65 € you can spend the entire afternoon, steam bath, sauna, a dip in the pool, lounging on the warm marble slab (but in a bathing suit, unlike the ladies above), efficient and thorough exfoliation by a very vigorous North African lady, application of "rassoul" (a kind of purifying clay), lounging in the rest area with mint tea and pastries and finishing off with an almond oil massage!

If I don't have a whole afternoon to spend getting pampered, a Chinese pedicure (30 min) and/or reflexology massage (45 min) at the Institut Yung near the big department stores of Au Printemps and Galleries Lafayette is a real treat...and if you get both the pedicure and reflexology they have a discounted price.

For afternoon tea, there is Angelina's on the rue de Rivoli with it's early 20th century Art Nouveau décor by Jean-Edouard Niermans, Ladurée (several locations all over Paris) and its inimitable macaroons. Of course you can always visit probably the only Starbucks with murals on the ceiling and crystal chandeliers on the boulevard des Capucines near the Paris Opéra.

Near the Opéra as well, there is a shop run by the French post office, Le Carré d'Encre, dedicated to the art of writing. It has one of the best selection of journals, letter paper, rubber stamps, pens in Paris. You can even get personalized stamps for your postcards and letters and original Paris souvenirs.

Otherwise, for all kinds of art supplies there is Rougier & Plé and Graphigro (several locations in Paris). For beads and trims I like Perles Box at rue Bernard de Clairvaux (near Centre Pompidou) for the retail store (the wholesale store on the rue de Turbigo) but there is also La Droguerie near Les Halles. For knitters there is Le Comptoir at 26 rue Cadet 75009, small boutique but good selection of quality yarns and beautiful buttons.

For embroidery and sewing supplies, I like Modes & Travaux near the Gare Saint-Lazare (incredible selection of embroidery floss) or for some serious sewing, there are Tissus Reine and Marché Saint-Pierre both at the foot of the Butte Montmartre and across the street from each other.

Finally, for really fun and unusual Paris souvenirs try Pylones (several locations in Paris)...cheese grater in the shape of the Eiffel Tower anyone?

I hope this is helpful, I'm more than happy to answer specific questions and maybe if you like, write on other topics.